You are here: Home › Science Behind Our Coaching
Some of the science ideas behind our
business coaching techniques
The Mind Gym

What do you do when you are under pressure?

What happens in your office when there are conflicting viewpoints?

When presenting or pitching do you get the results you want?

How do you get the best out of your team?

On this page you will find a number of experiments that explore and question intuitive response, from which you may sometimes draw some interesting conclusions about yourself, your business and the teams you work with.

Look at this sequence:

How would you fill in the fourth box? 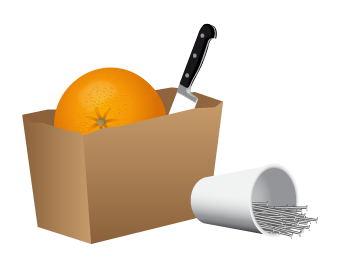 Take a look at this image of a brown
paper bag with an orange and
knife inside, and a coffee cup
with 49 nails inside it.Your task is to get the juice of the
orange into the cup without any
juice spilling anywhere else.

How would you do it?

This experiment is best done with a paper and pen. 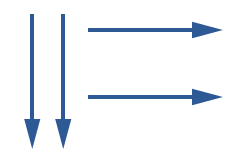 Take a look at the arrows. How many variables can you create in 60 seconds, using these elements?

Partitions
Look at the aerial view of the office cubicles of A,B,C & D.
As some parties are discontent, what would be the
best reconfiguration, bearing in mind the following:A doesn’t want to move cubicles
Everyone demands they keep at least 2 partition walls except A
D feels isolated from colleagues 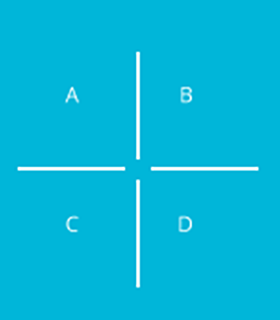 They are not allowed to talk to each other.

What would you do?

Did you assume that there was a logical sequence, try to find the “correct” answer or did you fill the box in a non-sequential fashion?

In this experiment there are a number of responses including these:

Each one of these may well relate to how you like to generally respond to tasks.

One solution might be to use one nail to pierce the orange whilst over the cup and then gently squeeze the orange juice out of the hole made by the nail.

This experiment is inspired by the Dunkers experiment, which explores the notion of Functional fixedness.

This concept demonstrates a bias that means we may only perceive and use objects in the way they are more traditionally used, which, in turn may limit our ability to problem solve more effectively.

This experiment is inspired by Games Theory and follows on from the previous experiment.

There are 27 permutations. 60 possible outcomes.

Ironically you are more likely to get your desired outcome by not choosing your preference.

It can be useful to note the propensity to either rationalize a dilemma or to respond emotionally – what may appear on the surface to be the most intuitive response can prove, in the long run to be less beneficial to us and those around us, if not looked at more strategically.

This exercise is a light introduction to the concept of ‘positions, interests and needs’ and the art of negotiation. 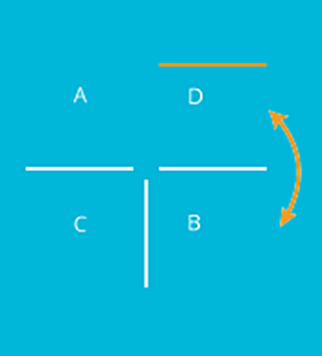 Our experiment explores how quickly one perceives a resolution. For example, if two candidates are competing for promotion and their interests are different, i.e. one wants an increase in salary and one an opportunity to work abroad, a manager might increase the travel opportunities of one and give the promotion to the other.

A number of frequent responses include:

In this experiment it can be interesting to note how quickly or slowly new shapes come to mind and whether one has more propensity for one particular style or approach than another.

Being aware of which propensity is most instinctive, can be a useful starting point for observation and discussion, when building a team or working on a project.

In this experiment people may perceive the middle shape as different when the surrounding shapes are covered, despite knowing that the shape is the same. Others may see no change at all.

Much work has been done on so called ‘gut’ responses, and their relationship with decision making, not least by noble prize winning economist Daniel Kahnerman.

It can be useful to reflect back on the ‘facts’ of a situation and differing perceptions, especially when experiencing conflicting viewpoints.